Transboundary aquifers are not only a source of freshwater for human society, they also represent geographic, economic and geopolitical ‘space’.

While nations establish their limits by political boundaries, aquifers are delimited by their hydrogeological dynamics; understanding and defining the boundaries of these water bodies is complex, due to both the intricate physicochemical processes to which they are exposed, and the available information by which they are characterized. Understanding transboundary aquifers is further complicated by the socio-political and territorial issues that arise as a result of their existence. There is no doubt that management of transboundary aquifers is a challenge, particularly when addressing governance issues.

Furthermore, in light of Agenda 2030 and the new development framework, there is clear evidence that proves the need for institutional strengthening on transboundary aquifers management and the resulting issues raised. In addition, there is an absence of characterization and legal guidance on this subject with regards existing multilateral environmental, regional, and sub-regional agreements (i.e. Paris Agreement, UN biodiversity convention, the RAMSAR Conventions) as well as transboundary river basin treaties and agreements.

The Second International UNESCO Conference on transboundary aquifers, ISARM2021 “Challenges and the way forward” aims to showcase diverse efforts made by UNESCO and the International and Donor communities (the Global Environment Facitily -GEF, the World Bank -WB, the Food and Agriculture Organization -FAO, the Swiss Agency for Development and Cooperation -SDC, the German Agency for International Cooperation -GIZ... ) to streamline groundwater as an enabler for achieving the water-related SDGs.

Check out the program overview 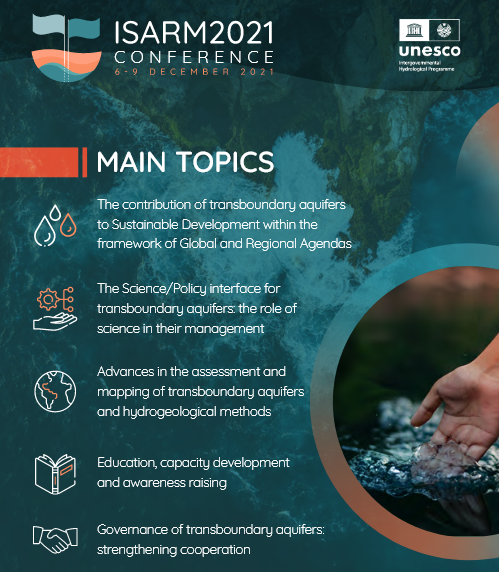